ver the years Random House and Louis L'Amour Enterprises have produced many adaptations of Louis L'Amour stories as Audio Dramas. This style of production was inspired by the classic radio dramas of the 1930s through the 1950s. Some of our shows are, more or less, in the style of the old time radio dramas others are more contemporary and innovative.

Audio Dramas do not attempt to be the exact story as written by Louis. They are adaptations. Louis approved of this approach . . . in fact it was his idea. 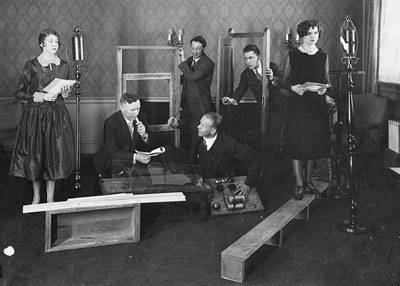 The following is how a typical Louis L'Amour story is turned into an audio drama:

A particular story would be selected and a writer chosen to adapt it. This is a process very much like writing a movie script, in fact many of the writers of our "Audio Plays" were writers for the screen or stage. A particular "take" on the story is chosen as the focus of the script. Anything that does not support that theme usually goes by the wayside. Short stories do not necessarily make short drama, there is often as much plot in a short story as in a novel . . . just less detail. So to create a sixty minute drama much of the story must be kept to a minimum. The story usually must be told in only fourteen to nineteen scenes.

One of Louis' many
stories created into
an Audio Drama

Those scenes are developed from ideas or situations in the story some of which might never have appeared to be a "scene" to a casual reader. The sketchy "short hand" dialogue you find in most novels or short stories is expanded into fully fleshed scenes. Throughout the process there is often a lot of rewriting and in that rewriting there is a lot of discovering what the story was really about . . . or what it will be about now that it is becoming a drama.

Scenes from the script are then used to audition a group of actors to play the various parts. These actors are stage and screen professionals working in either New York or Los Angeles. The chosen actors briefly rehearse then, a day or two later, the show is recorded.

CLICK HERE
to hear an excerpt from the Audio Drama: "Son of a Wanted Man"

Sound effects are created in many ways, sometimes we use various tricks from the early days of radio, like using coconut shells on cereal, kitty litter, and rocks to simulate the sound of horses hooves, or blowing gently into an unprotected microphone for the sound of a hot, blustery, breeze (as opposed to cold whistling wind), other times the exact source is recorded, real horses, wagons, guns etc. -- it depends on the style we have chosen for the show and how it is best to create the effect.

Music is added, sometimes it is prerecorded "library music", sometimes it is specially composed for our programs. The scenes are carefully edited and then the elements (dialogue, sound effects, and music) are mixed together to give you the finished program.

A far more in depth description of our program and of this process is available at - SONOFAWANTEDMAN.COM

The Louis L'Amour series of Audio Dramas is one of the longest running and best selling series of all time.