Order the entire Sackett 17 Novel collection today and save!!
(Does NOT include The Sackett Companion
or the two short story collections.)

In 1959 Louis L'Amour wrote The Daybreakers, his first novel about his fictional Sackett family. It chronicled the story of two brothers moving west to escape the feuding and poverty of the Tennessee mountains. They join one of the first cattle drives to Kansas, seek their fortunes on the southern plains and finally settle in Mora, New Mexico. As they explore the landscape of the west they learn the cost of friendship, love, and the value of education.

The Daybreakers stands out as one of Louis' finest novels and was certainly one of his favorites. It spans a great deal of western history from the early cattle drives to the legal battles and racial tension over land distribution in early New Mexico Territory. It includes some of L'Amour's greatest characters; the hard bitten Tyrell Sackett and his all too affable older brother Orrin; Tom Sunday, the powerful man who starts as their mentor only to become consumed with hatred and jealousy; the scheming Jonathan Pritts and his lovely daughter Laura, soon to become Laura Sackett; Don Luis, the embattled owner of the Alvarado Land Grant and his feuding lieutenants Juan Torres and Chico Cruz.

While continuing to write Sackett stories set in the old west, Louis L'Amour also went back to establish the family's roots in Elizabethan England. "Sackett's Land" and "To the Far Blue Mountains" have much of their action set in the British Isles. "The Warrior's Path" splits its local between the Spartan conditions of the early Pilgrim colonies and the tropical chaos of Port Royal, Jamaica, headquarters to the pirates plying the Spanish Main. "Jubal Sackett" travels west to what would become Colorado in the time of the Conquistadors.

Louis intended to write another
seven or eight Sackett stories.

The jump in time to "Ride the River" unfortunately shows us how much this series suffered from Louis' death. This story is set in the 1830s and concerns young Echo Sackett and her troubles claiming an inheritance in Philadelphia and along her way home. Louis had originally intended to write another seven or eight Sackett stories. One was to have covered the Revolutionary War period, there was to have been a Mountain Man novel about Tell and Orrin's father, a story about Tell's experiences in the Civil War, and several others. Luckily, the stories were not written as an ongoing "serial" and so each can be enjoyed for it's own sake. In addition, Sackett characters appear momentarily in other L'Amour novels and there are two Tell Sackett short stories available.

Louis L'Amour's inspiration for the Sackett characters was a pair of young cowboys that pulled him out of a street fight in Tucumcari, New Mexico when he was fifteen. When Louis asked them why the other boys had seemed so afraid of them the older one explained that they were cousins and between them they had over a dozen brothers . . . "and if you fight one of us and beat him, you've got to fight us all." Louis spent only a few days with them, talking through the evenings and riding the Pecos valley but their sense of clan-like loyalty and simple but honest philosophy stayed with him.

Years later, exploring the desert west of Yuma, Arizona, Louis came upon a spot called Sackett's Well. Named after a Lt. Delos Sackett, this bleak desert watering hole gave him the name for his fictional family. After his initial success with "The Daybreakers," "Lando," and "Sackett," L'Amour committed himself to an enormous project; to write a series of adventure stories touching on all eras of American history. Through the eyes of three families, the Sacketts, the Chantrys, and the Talons, he intended to take us on a tour of the past from the 1590s to the 1890s. Sadly, Louis did not live long enough to write more than half of the stories that he intended.

Below we have listed all the Sackett stories and the best order in which to read them.

Other Talon and Chantry Novels

Order the entire Sackett 17 Novel collection today and save!!
(Does NOT include The Sackett Companion
or the two short story collections.) 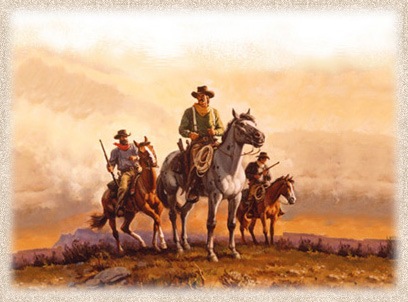