Where is the town of SHALAKO that Louis mentioned he was building in several of his books?

Is there a sequel to THE WALKING DRUM?

Is there a sequel to LAST OF THE BREED?

When did Louis write his first western and what was it?

Who is Tex Burns? and a related question, Did Louis Write some Hopalong Cassidy Novels?

What ever happened to The Louis L'Amour Western Magazine?

I heard a show called The Louis L'Amour Theatre on the radio several years ago. Can you tell me what happened to that?

What is the correct reading order for the Sackett series of books?

What is ROWDY RIDES TO GLORY?

I have one of the Audio Cassettes but I cannot find the corresponding novel. Can you help me?

Can you tell me the titles of all the stories featuring Lance Kilkenny?

Where can I get a complete list of ALL of the books that Louis wrote? 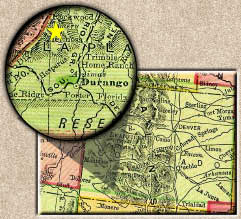 The town of Shalako -- In the late 1960s Louis got involved with a company that wanted to find a use for a large piece of land that they owned at the base of the La Plata Mountains just west of Durango, Colorado. With Louis' help they decided that they would plan a development that would be a combination of a living museum and a western theme park. Over the following years additional property was secured, plans were drawn up, the process of securing environmental impact statements was begun. There were hold ups of different sorts, in planning, financing, and in deciding the company's exact mission. Shalako, the name of the development, was never the only business that the company was involved in and finally it ran afoul of complications in some of its other business ventures.

Ultimately, the town was not built. The land was sold and the dream died. Louis had done a lot to promote the idea over the years; including a note about it in the back of some of his books and discussing its future in interviews. He was never, however, deeply involved in the corporation's operations. His role was more of a consultant and the founder of the western town idea. After Louis passed away in 1988 the L'Amour family briefly considered working with another group to resurrect the idea. After a great deal of thought they decided that the potentially negative impact of that particular type of development on a wilderness area was not something that they believed in.

It is a remarkable testimony to the power of Louis' original idea, however, that people still regularly ask how to find Shalako when they are in the Durango area.

Sequel to The Walking Drum -- Throughout his career Louis wrote several different series or cycles of stories and sequels. The first were about the South Seas adventures of Ponga Jim Mayo, then came Chick Bowdrie, Ward McQueen, Kilkenny, the Sackett's, Chantry's, and Talons. As he did not like to write them in order and also tended to write other material in between there were quite a few stories that he did not live long enough to tell. Most of these stood on their own so while his death left holes in the greater, historical, sweep of the series it did not make anyone feel unfulfilled or that the immediate story was incomplete. The exception to this was "The Walking Drum." Although Kerbouchard's quest to find and free his father was complete at the end of the novel Louis ended the story with his hero starting off after the woman with whom he had fallen in love, thus beginning what was to have been the next installment in a three book series. Alas, those sequels were never written. Book Two was to have been called "A Woman Worth Having" and, if it had been written, been set in India. The details of Book Three remain a mystery.

Sequel to Last of the Breed -- Louis never wrote or even planned a sequel to this book. He imagined a few scenes that might be in it, like what would happen if Joe Mackatozi confronted Col. Zamatev at an arms control conference, but he never really had a story planned out. There is, however, a strange connection with the short story The Skull and the Arrow (in the collection End of the Drive). The Skull and the Arrow was intended to have been a scene in the middle of "Last of the Breed," the moment when Joe decides to escape Russia by going back to his Native American roots. Why Louis did not use this scene/story is also a mystery.

Louis' first Western - Before WWII Louis was mostly writing adventure and boxing stories, many of which have only recently been published in the new short story collections. During this time he only published two westerns, the first being The Town No Guns Could Tame (in the collection Long Ride Home).

Tex Burns and Hopalong Cassidy - My father was Tex Burns. He's gone now, so I feel it's time to stop denying it. I really don't think that Tex ever did anything he needed to be ashamed of; all he did was lose an argument. Nonetheless, Tex Burns was persona non grata around our house.

In the spring and summer of 1950, Louis L'Amour wrote four stories about Hopalong Cassidy. He used the pen name Tex Burns and the books were commissioned by Doubleday's Double D Western imprint. The Rustlers of West Fork, Trail to Seven Pines, Riders of High Rock and Trouble Shooter were the first four novels that he had ever published. 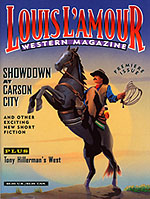 The Louis L'Amour Western Magazine -- In 1994 and 1995 twelve issues of the Louis L'Amour Western Magazine were published. It was released bimonthly and contained short stories of the old and new west by both novice authors and old pros, articles on western history and travel, photographs and art. Just as the L'Amour family was planning to expand it's format into news and editorials on current issues in the west and add more stories and travel materials, The parent company decided to sell the whole Dell Magazines division. Rather than have the magazine go to a new owner who would perhaps not retain it's quality, the L'Amours decided to shut down operations with the hope of restarting at sometime in the future. At the time of it's demise Louis L'Amour Western Magazine was quite successful, with over 130,000 subscribers.

Louis L'Amour Theatre Radio Show - For about two years, in different parts of the country, a syndicated radio show was broadcast. Louis L'Amour Theater ran on over two hundred stations, nationwide. The shows were slightly edited versions of the dramatized short stories available from Bantam Audio Publishing and we have them in their original form in the audio section of The Louis L'Amour Trading Post. We look forward to the rebroadcast of Louis L'Amour theater in the near future.

Sackett Reading Order -- We have posted a whole bunch of information about the Sacketts including a suggested reading order in a special SACKETT section. Click HERE to go there.

What is ROWDY RIDES TO GLORY? -- Rowdy Rides to Glory is a short story that is published as part of the short story collection called LONIGAN. At one time, Rowdy Rides to Glory was printed as a separate book and given as a gift to the members of the Louis L'Amour Leatherette Book Collection. It was a special printing only for those members of the Collection that had completed the collection. That is they had received, kept, and paid for every book in the Louis L'Amour Collection at that time. It was never intended to become part of the collection and is NOT part of the collection. It was also never published as a separate book for retail sale and as such we don't list it on our web site. We don't have it for sale. It was one of the perks of being one of the first members to complete the collection. That is a pretty small group and Rowdy was intended to be a collectable for them.

I have one of the Audio Cassettes but I cannot find the corresponding novel. Can you help me? -- Many of the audio cassettes are audio adaptations of short stories NOT novels. We have linked each audio tape to the corresponding book in which the story was published. If you have an Audio Cassette and want to know what book it is in, go the the AUDIO CASSETTES section of The Louis L'Amour Trading Post and browse for your title. Click the MORE INFO link next to your title and you will find a page describing the tape. Near the top of the page under the title you will see a picture of a book. Click the book and you will be taken to the book from which that Audio Cassette was taken.

Can you tell me the titles of all the stories featuring Lance Kilkenny? -- Click HERE for a listing and links to all the Lance Kilkenny Novels and Short Stories.

We have complete book lists available in some different formats: