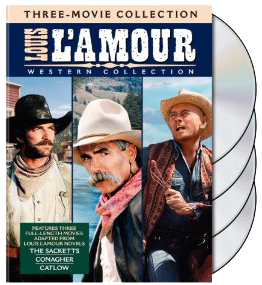 NONE TOUGHER. NONE FASTER. NONE DEADLIER.

The Old West comes to life in this taut, searing, bloody tale of crime and vengeance starring Sam Elliott (Mask, Sibling Rivalry) as Conagher and Katherine Ross (Butch Cassidy and the Sundance Kid, The Graduate) as Edie.

Any man is crazy to pull a gun on Conagher because he shoots once - and shoots to kill. Hired to guard cattle on a nearby ranch he discovers his fellow ranch-hands are in league with a gang of rustlers. When Conagher gets on their trail and is taken down by a bullet from behind, he doesn't just want revenge, he wants justice. And he'll kill to see justice done. Then, when the killing is over, maybe he'll find a place to call home and a woman like Edie waiting for him . . . if he survives.

Yul Brynner has Richard Crenna at his side . . .
and Leonard Nimoy at his back!

Tough, lusty Catlow (Yul Brynner) is fast on the draw and even faster when it comes to making a dollar. He's also a wanted man. The Mexican Army is after him. So are his hellcat girlfriend, an Indian war party, a vengeful killer (Leonard Nimoy) and several hotheaded cowpokes from Catlow's outlaw gang. With enemies like these, it's a good thing Marshal Ben Cowan (Richard Crenna) is around. The marshal is Catlow's best friend, and he'd ride through rattlesnakes to rescue his besieged buddy. Because Cowan wants the pleasure of putting Catlow behind bars all to himself.

Brynner and Crenna bring a backslapping, backstabbing camaraderie to their portrayal of friendly foes. Nimoy, as mean as a hungry coyote, supplies the menace.

This western rides hard, shoots straight and winks amiably through its clouds of dust.