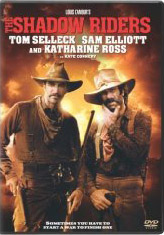 The Shadow Riders is all-time best-selling western writer, Louis L'Amour's adventurous story of handsome heroes, renegades, scoundrels and a hellion in petticoats. It's 1865, the close of the Civil War; two brothers, a Yankee, Mac Traven (Tom Selleck), and a Rebel, Dal (Sam Elliott), return home to Texas to discover that their sisters and Dal's spirited sweetheart Kate (Katherine Ross), have been kidnapped by marauding Rebel guerrillas who refuse to accept the defeat of the Confederacy.

Mac and Dal break their notorious uncle, Black Jack (Academy Award Winner Ben Johnson) out of jail, to help them rescue the women before they're sold as slaves to a Mexican brothel. It's classic ol' time western action from the director of "Shennandoah," "The Way West," "Chisum," and "Bandolero."

Note: Angelique L'Amour is one of the captive women!