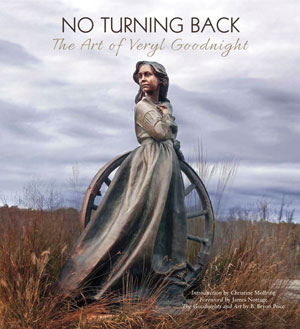 No Turning Back - The Art of Veryl Goodnight

“The La Plata Range is is near the ranch from which Louis wrote many books.  This is Louis L'Amour country and many of the same things that inspired his books - the high mountains, the western heritage and the animals - inspire my work today...”

“The book you hold in your hands is the honest and open story of Veryl Goodnight’s journey as a person and as an artist. One should contemplate, however, not just how her work has grown and developed over the years. This personal story since the early 1970s runs in concert with pivotal years in the story of Western art.”

The Introduction by Christine Mollring, owner of Trailside Galleries from 1971 to 1994, reminiscences about gallery life and Veryl’s early career.  Western history enthusiasts will find a treasure of little known facts about the lives of Colonel Charles and Mary Ann Goodnight in the essay by B. Byron Price.  Roger Brooks, Veryl’s husband relives the saga and challenges of placing “The Day The Wall Came Down,” a seven-ton monument to freedom in Berlin, Germany and at the George H. W. Bush Presidential Library.

Veryl shares stories in her own words of the animals, landscape, and history that have influenced four decades of her work.  She explores social influences that have affected the art of her generation and illustrates the positive changes brought to the art world more recently through digital technology.  She openly credits many of her contemporaries for their support and compares painting with sculpture.  The process of creating a monument from clay through casting is illustrated and explained.