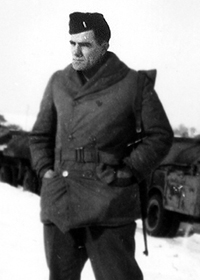 ouis was inducted into the US army late in the summer of 1942. After boot camp he went to Officer's Candidate School and then Tank Destroyer School. By the time he was eligible to join a TD outfit he was ordered to change assignments because with his 35th birthday just over six months away he would be too old to join a combat unit. He joined the Transportation Corps and was sent to England and then on to Europe with a trucking company. As a second Lt. he commanded a platoon of gas tankers that supplied planes and tanks all through the fighting in France and Germany. Before he returned home he was promoted to 1st Lt. and was briefly a company commander. While in Europe he gathered the background that he later used in his stories about that area. He visited many of the locations that appear in Meeting in Falmouth (collected in Beyond the Great Snow Mountains), The Walking Drum, Sackett's Land, and To the Far Blue Mountains. He met the people who were models for the characters in A Friend of the General (collected in Yondering), Reilly's Luck, Kiowa Trail and The Cross and the Candle (collected in Off the Mangrove Coast).

After his discharge Louis returned to the U.S. only to find that the market for his Adventure stories had nearly disappeared. Now editors were asking for Mysteries and Westerns. Because of Louis' background, an old friend in the publishing business pushed him in the direction of Westerns. Following his friend's advice, Louis L'Amour moved to Los Angeles, a city he knew well from his sea-faring and boxing days, settled into a small room in the back of another family's large apartment and began to write. For the first couple of years he sat on the bed and worked with his typewriter sitting on a folding chair. Compared to his Oklahoma days his output was enormous. In one year he sold almost a story a week and wrote even more than that. The pulps had never paid very well and that situation had not changed much. Louis' average take on a short story was less than $100. 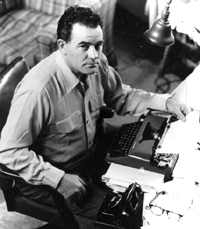 At the typwriter,
Los Angeles apartment, 1953.

By the early 1950s, pressured by radio, TV, and the paperback book, the pulp magazines, which had published a majority of the fiction in the United States, began to go out of business. Many writers, Louis included, found it harder and harder to sell their stories. Like others Louis tried many different markets. He sold "Westward the Tide" to a British publisher. Four Hopalong Cassidy novels went to a short lived magazine based on Clarence Mulhford's character, and "The Gift of Cochise," "Get out of Town," "Booty for a Badman," "The Burning Hills," and "War Party," to what were called the "slick" magazines like Colliers and The Saturday Evening Post.

Louis had already sold several novels (Westward the Tide, his four Hopalong Cassidy stories, Crossfire Trail, Utah Blaine, and Silver Canyon) to paperback publishers when Hondo, a film made from his short story Gift of Cochise (collected in War Party) hit the silver screen. Also prior to the release of Hondo, he had sold several other projects for movies and TV. In 1951 a couple of episodes of Cowboy G-Men were made from his treatments and he sold a series pilot called One Night Stand (collected in The Strong Shall Live) to Bing Crosby. He also sold a story to Fireside Theater and the treatment for the feature East of Sumatra to Universal International. But it was the success of Hondo that gave Louis' career a much-needed boost.